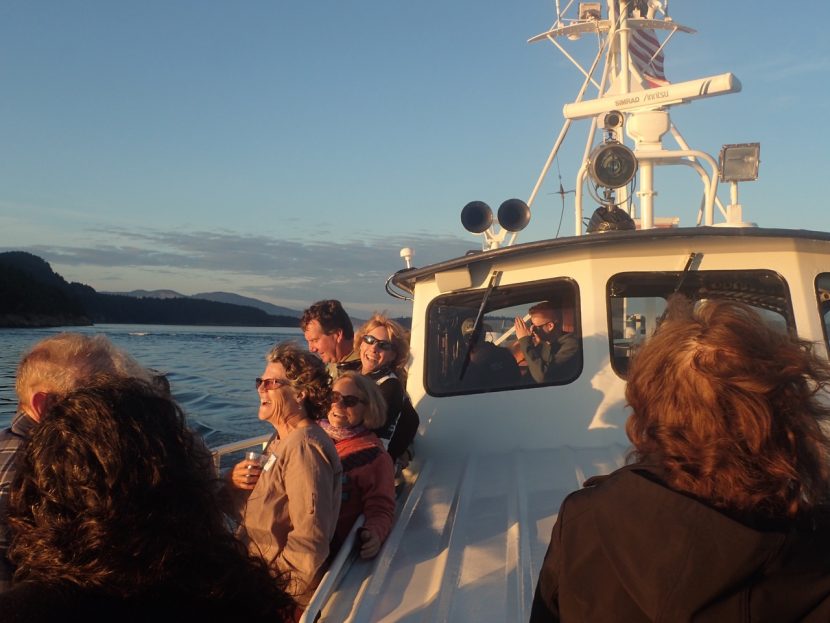 In Case You Missed It - Harvest Moon Dinner Cruise

Meeting on Seafarer’s Way at the Anacortes Marina was an expectant group (~50) of friends and neighbors waiting to board the cruise ship Mystic Sea for the promised “Harvest Moon Dinner Cruise” planned by the Guemes Island Historical Society. This was a new idea for the Society (which is headed by me, President Tom Deach) to ramp up the fun while adding to our treasury at $100 per head.

Other ‘fun’d raisers have been the selling of the historical calendars each year; the “Dog Days of Summer Dog Island Dog Show”; Fall Bazaar where we sell soup and baked goods in the fellowship hall of the Guemes Church plus rent space there and at the Community Center to local artisans.

We also welcome and accept donations toward the mission of the group which is to reveal Guemes history, work toward safe-guarding the ever-growing collection of historical artifacts and have fun!

I arranged for cheerful volunteer taxi drivers to transport folks from the Guemes ferry dock and back again. Carol Harma managed the passenger list as Kit Harma, Kevin Green, Al Bush, Edith Walden, myself and others helped load the boat with the delectables - delicious cheese trays, “slider” sandwiches, pasta salad and the decadent cookie bars to top it all off! – all planned by David Rockwood. A satisfying variety of liquid refreshment was supplied and expertly served by Michael Brown and Mickey McEachern.

The captains of the Mystic Sea and their crew were very welcoming, helpful and friendly. Monty and Eric pointed out such interesting sights as the named coves and beaches on Guemes as well as on the other islands we passed by.

The cruise began as we swung out into “Fidalgo Bay” heading for “Casperson Point” on the SE point of Guemes. Continuing toward the north, the Mystic Sea skirted the point and snugged in between Guemes and Huckleberry Islands. Rosie Cayou James had supplied us with very interesting maps including notable historical references. She gave commentary on the recent acquisition of Huckleberry Island by the Samish Indian Nation. The Washington State Parks and Recreation Commission has transferred ownership of the approximately 10-acre island to the Samish since owning the island no longer fits within the vision of the state agency; plus the Samish have found evidence of ancestry there. Staying north, we soon passed “Long Beach” beneath “Holiday Hideaway” and then “Square Bay” before following the north shore of Guemes. Along that stretch we had good views of “Seaway Hollow” and “North Beach” from the “Flats” all the way past the “Guemes Island Resort”, toward the most northwesterly “Clark Point”.

Views toward the east included Samish, Jack, Vendovi and Lummi Islands with Bellingham Bay in the distance. Heading around “Clark Point”, we could see towering fir trees, spreading maples and ancient cedars in the once dense forest high above this end of the island.

As West Shore Road turns down the hill toward the beach, home sites appear. Rosie pointed out the land on “West Beach” occupied by her tribe many years ago. She sang a tribute to her family nd tribe as we motored on by the home of her aunt, Jackie Bohn, who came out on the deck to give us a wave.

Swinging away from “West Beach”, we then crossed “Bellingham Channel” and motored over to Cypress Island where we saw the recently collapsed fish pens, “Secret Harbor” and “Strawberry Bay”.

As the sun began to sink into the sea the crew gave us a nature tour of “Bird Rocks” in “Rosario Strait” with the many cormorants, gulls and the 2000-plus pounds of sea lions curiously checking out our passing ship. Circling “Bird Rocks” as the sun set was a very special treat. Lights on shore began to come on and we saw two state ferries, all lit up as they passed each other.

The Mystic Sea turned across the strait and toward “Guemes Channel”, heading back east along the Anacortes waterfront, past the Guemes ferry dock, past Piers 1 and 2, around Cap Sante and back to port. We all disembarked, clutching our maps, looking for taxi ride back to the ferry dock, hoping for a repeat performance of friends, food and fun in 2018!