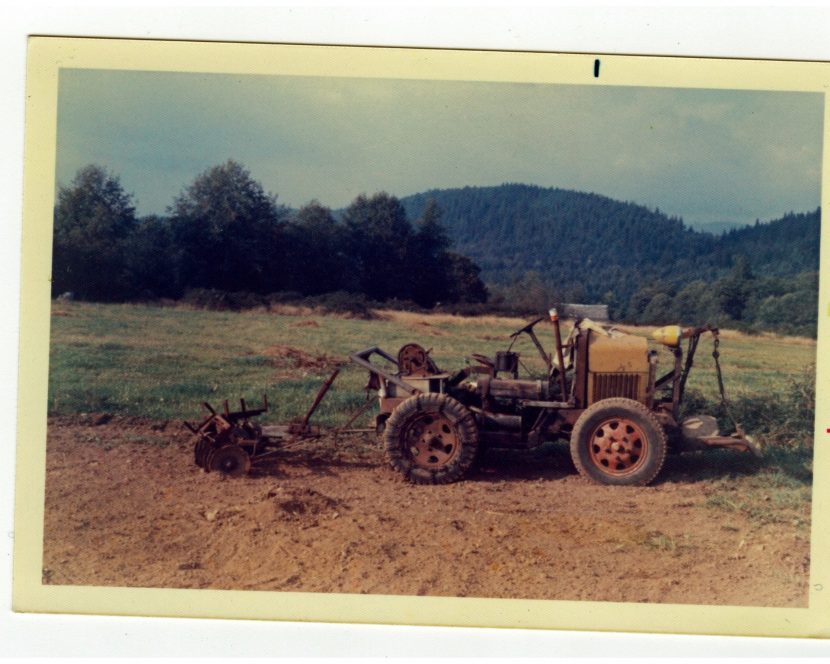 What do you get when you have more time than money? Ingenuity! This tractor was built, by my Dad, from an old DIVCO milk truck. I don't know the vintage, but the hood looks like one on a model from the mid-'30s.

The tractor featured a 4-cylinder continental motor and back to back transmissions (originally a 3-speed in front of a 4-speed, but later changed to two 4-speeds) which meant that you had an additional low-low gear when both trannies were placed in reverse at the same time! These were coupled to a Model T truck, Ruckstell, 2-speed rear axle for even more reduction. Brakes were mechanical, attached in conjunction with the clutch pedal so you always had the chance (think “thrill”) of rolling out of control between the time the clutch was disengaged and the brakes (if working) were applied. Only the left front brake worked most of the time, so it made for some interesting episodes when trying to stop on our country roads, or maneuvering on often steep and unforgiving farm grounds.

Along with the hood, other remnants of the old milk wagon remained. The frame, along with the steering gear, the aforementioned clutch/brake pedal and firewall were all Factory originals. Mounted on the firewall was the original dashboard, sporting all the instrumentation one could possibly need; oil pressure and water temperature gauges. I don't remember it having a speedometer. Old fashion switches operated the dash lights (originals) and the remaining headlight which may have been OEM since it was painted in a yellow that kind of matches the hood (if you don't look too closely) but was probably salvaged from the ever-present scrap pile behind the shop. Early on, the seat was "original" equipment, stuffed with what looked like horsehair and covered with heavy leather upholstery. Later, it was “upgraded” with an old hay rake seat, but possibly mounted on the original cantilevered seat pedestal for “standup” driving; essential, evidently, for both milkmen and farmers. I learned to drive on this exceptional machine. Since I wasn't near the towering 5'3” I am today, I can only imagine the figure I cut scampering up and down to maintain control of this family workhorse. It did it all: pulling our hay mower and rake, hauling water and wood, dragging the “stone boat,” skidding logs, land clearing, and grading.

On the back, you can see a hand operated winch mounted on a concrete block with a 2" diameter pipe "arch" and a “block” to run the winch cable through. This was pretty effective if you had the strength and stamina required to winch out a stump, rock, or occasionally the tractor itself. I remember seeing the concrete block “cant” in its cradle from the excess strain on the cable; when determination overrode backyard engineering. There was no 4-wheel drive on this beauty, so traction was "enhanced" with military tires and chains which were never taken off. But the DIVCO's best feature was the front blade. Made from heavy truck frame material (and often weighted with whatever rocks were on hand), the curved blade was fabricated from an old water tank with a piece of cutting-edge welded to the bottom. It was raised with a hand operated hydraulic pump plumbed to a cylinder which raised the blade when ferociously pumped to prevent cutting too deep and stalling the machine. It was lowered by opening the pump valve and letting gravity take its course. With careful planning, proper gearing, a light touch on the clutch, furious pumping and feathering of the hydraulic valve, the machine became poetry in motion!

This tractor was part of the Deach family from the late 40's / early 50's through at least the 1990's. The accompanying photo shows old “Betsy” resting at Startup, Washington after it had removed a blackberry patch some 6' high, then graded and disked the area for seeding. Notice the canvas dashboard cover and Campbell soup can on the stack which served as its garage for most of her life.

Note: DIVCO (Detroit Industrial Vehicles Company) has a pretty fascinating history in itself!