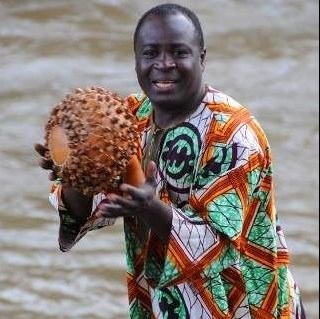 Kpanlogo, Krokrokoto, Fanga, and others

Saeed Abbas is from the Hausa tribe in Accra, Ghana. He has performed and taught traditional West African percussion for almost 30 years. At 19, he auditioned into Ghana's prestigious National Dance Ensemble becoming their master drummer. In 2012, he was awarded the Master Drummer certificate from the Ghana ministry of culture.

With the National Dance Ensemble, he traveled the world performing for many dignitaries such as Bill and Hillary Clinton, Queen Elizabeth II, Tony Blair, and at the Kennedy Center. After 4 years in the Northwest, he moved to the East Coast in 2008 where he taught and performed at such prestigious schools as the Berklee College of Music and Dartmouth. He also did an 8 state tour with Taina Aisili and her La Bande Rebelde. He has recently been selected by the Washington State Arts Commission for their Teaching Artist Roster 2018.

Since, moving back to Whidbey Island in May 2016, he has performed with his own group the Gye Nyame Ensemble, Obo Addy’s Okrapong, JLP of Seattle, at the Anacortes Arts Festival, and at Hollyhock B.C., Canada, for the annual Dance of Life, where he also taught weeklong youth workshops.

He is passionate about the many indigenous rhythms of Ghana and wants to share his energy and enthusiasm. Helping others expand their musical expression is joy for him.