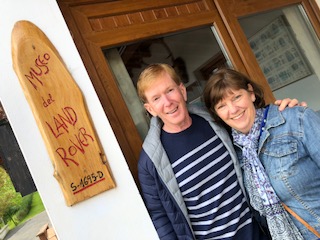 The Long Road To Guemes

Sometimes the truly unexpected happens for all the right reasons.  This was our recent experience on our road to the “other” Guemes.

My wife Marlene and I were recently staying in Spain, renting a flat in San Sebastian, using the city as our base to explore the Basque countryside.  During our three-week visit, our oldest son and his wife came for a short stay.  At the conclusion of their visit, we dropped them off at the Bilbao airport and decided to continue our journey west to the city of Santander, the capital city of the Cantabria region on Spain’s north coast, located at the mouth of the Bay of Santander on the rocky La Magdalena Peninsula. We were planning on having breakfast near the beach or the boardwalk.  Much to our surprise, however, everything was closed.  We should have known. This is a Catholic nation and it was Sunday morning. We eventually found a small coffee shop open.  We ordered two “café con leches” and “toasta” then decided to continue our journey, entering a random town in our GPS on the coastline that would that would take us off the freeway and into the countryside.

Within 45 minutes of driving to our selected destination of “Bayeu” we came upon the following road sign. 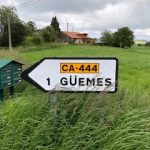 In the back of my mind I remembered there was a Guemes, Spain, but I had no idea where it was, until now.  Changing course we drove for roughly 10 minutes down a beautiful, pastoral, country road, filled with cows, grass, and rolling hills.  And then we pulled into Guemes town square, literally just as the church bells were ringing, reminding local villagers that Sunday mass was about to begin. I immediately jumped out of the car and took a video of the church bells ringing.

Somewhat overwhelmed with our recent discovery, we walked behind the church and discovered a bed and breakfast establishment with a small pub.  We walked inside. Using Google translate I ordered two diet cokes, a couple of sandwiches, and proceeded in “very poor Spanish” to explain that we were from Guemes, US.  Fortunately for us, the bartender understood English quite well and told us to wait at the bar.  Moments later the proprietor, Fermin, came out and excitedly told us that their local priest, Ernesto was visiting Guemes, US, with two of his associates, “that very day!”  He pulled up his Facebook account and showed us pictures of Ernesto with Guemes residents, Bob Anderson, Pastor Sally Balmer, and Ian Woofenden, to name a few.

I repeat, we did NOT plan this.  The story gets better. 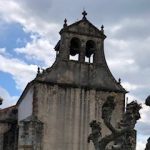 ere was a nine-hour difference between Guemes, Spain and Guemes, US, I sent a copy of the ringing church bells video to our friend and fellow Guemes parishioner, Lois Duncan.  That very morning when Ernesto and his friends were attending the Guemes Island church service, Lois stood up and played the ringing church bells of Guemes Spain.  Needless to say, everyone was quite amazed.  Ernesto was overjoyed.

Over 250,000 people have walked the centuries-old ancient pilgrimage to Santiago de Compostela, commonly known as “The Way." Father Ernesto’s Albergue is one of the stops where he has welcomed thousands of pilgrims from around the globe to a hot shower, a bed, food, and companionship.  During our visit we found out that Father Ernesto, who is now 80 years old, was actually born on the very site of his Albergue which can host up to 100 people a night.  On the evening we stayed at his Guemes Albergue there were roughly 50 pilgrims. Our hostess, Bego, introduced us to the audience of fellow, Germans, Frenchmen, Italians, Brits, and Spaniards, as travelers from the “other” Guemes in the US.

Our visit to the Guemes Albergue ended up being the highlight of our trip to Spain.  For Marlene and me, this was a journey that began in 1992 when we made our first “Guemes discovery” answering a Seattle Weekly add advertising a beach cottage for rent on a small island off Anacortes.  Little did we know that our journey would continue thousands of miles away along the Camino de Santiago in Spain 26 years later. The adventure continues. 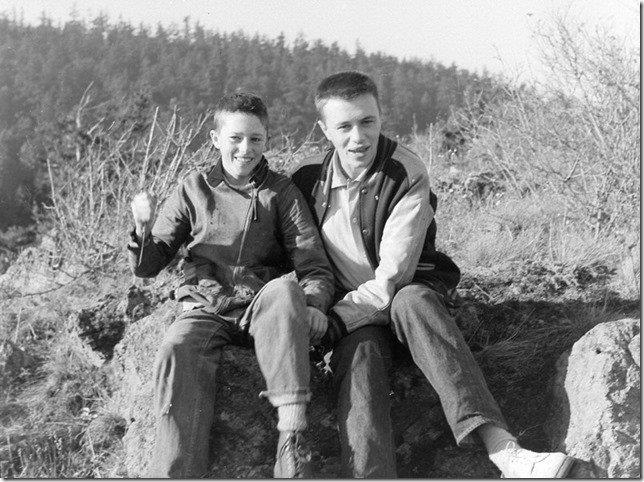 Bill Burlingame grew up on Guemes—arriving with his family at age 8 in 1946 and departing when he graduated from AHS to attend UW. He earned a Ph.D. in psychology and then taught clinical psychology at the University of North Carolina at Chapel Hill for 35 years. Since retirement, he now treats children, adolescents, and families in his private practice in Chapel Hill.

Bill witnessed and experienced some of the most momentous events of the 20th century on Guemes—electrification, telephone service (the second coming), and school district consolidation. He knew well some of the more colorful of islanders (One Bubble and Horsey Hamill) and knew the mainstays of island culture from that era (Bill Veal, Cliff Weigle, Colonel Vonnegut). Please know that Bill has an encyclopedic memory, but that his Guemes memories are also those of a child and teenager. Presently he continues to work on his memoir of the island years which will include all of the above and much more.

The presentation will be followed by the GIHS regularly scheduled business meeting. All are welcome to attend. For more information please contact Tom Deach via phone at 360-708-2582 or email deachtom@gmail.com.