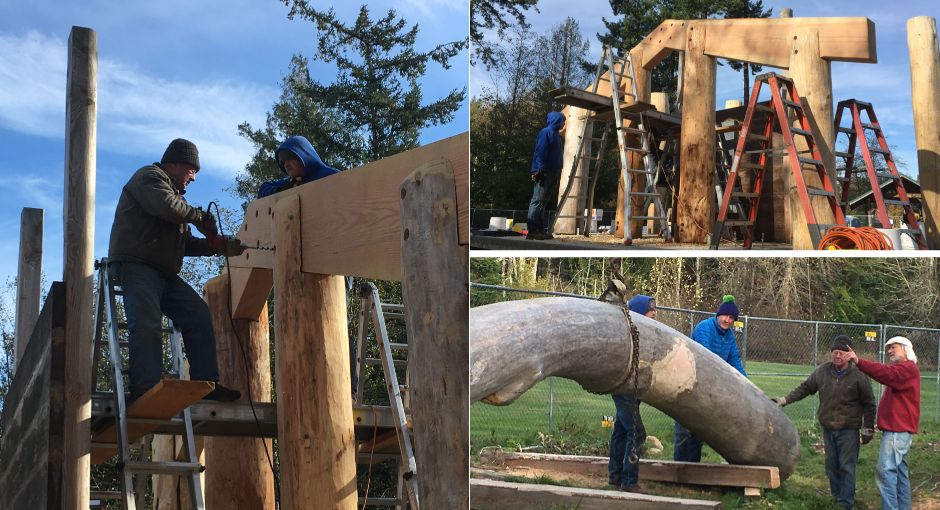 Drilling holes in back beam, Back beam in place, Finding the balance point

The seven 33 ft long logs that will be used for the purlins (front to back roof supports) are now at the site and in the process of being peeled and dressed. These logs replaced others that were unusable. Transporting these logs from Conway to Guemes was a community effort with many thanks to Bob Porter for his help.

Through Jep Burdock’s friendship with Dan Rankin, the mayor of Darrington, WA, we acquired two massive milled beams to be used for the back horizontal support beam. These also replaced a log at the site that was unusable. These milled beams were cut from a tree on Dan Rankin’s mother’s property in Darrington. She was a community activist and Dan was proud to see this wood go to a worthwhile community project.

Sandy and Kathy McKean donated additional logs for the eight perimeter vertical columns and for the two middle columns in the back. We replaced the latter with straighter logs that better accommodated the overhead beam. These logs are also being peeled and dressed.

Under Jep’s direction using his timber framing skills, Tom Fouts, Rick Norrie, and John Strathman assembled the Darrington beams according to the plan specifications. Forks were cut in the tops of the four back vertical columns. It took some “delicate” chainsaw work and Tom’s skilled maneuvering with the boom truck, but the back beam is now in place.

The next steps include fitting the front horizontal “showcase” log for placement on the two front vertical columns and construction of the wing walls that will enclose three sides of the stage performance area.

Many thanks to our dedicated core team who have given countless hours of their time and donated equipment, fuel, and ferry fees. Their wives also deserve a huge thank you as this project has taken Tom, Rick, and John away from many projects at home.